Many of us, thinking about ancient Rome and its culture, without hesitation will mention the famous Roman monuments such as Pantheon, Colosseum, triumphal arches, Hadrian’s Wall or the Appian road. However, less well-known monuments have survived to our times, which delight, but are no longer as well known to tourists. Below is a list of the 10 most interesting (in my opinion) and little-known historical objects related to the Roman state.

I. Tower of Hercules in A Coruna, Spain 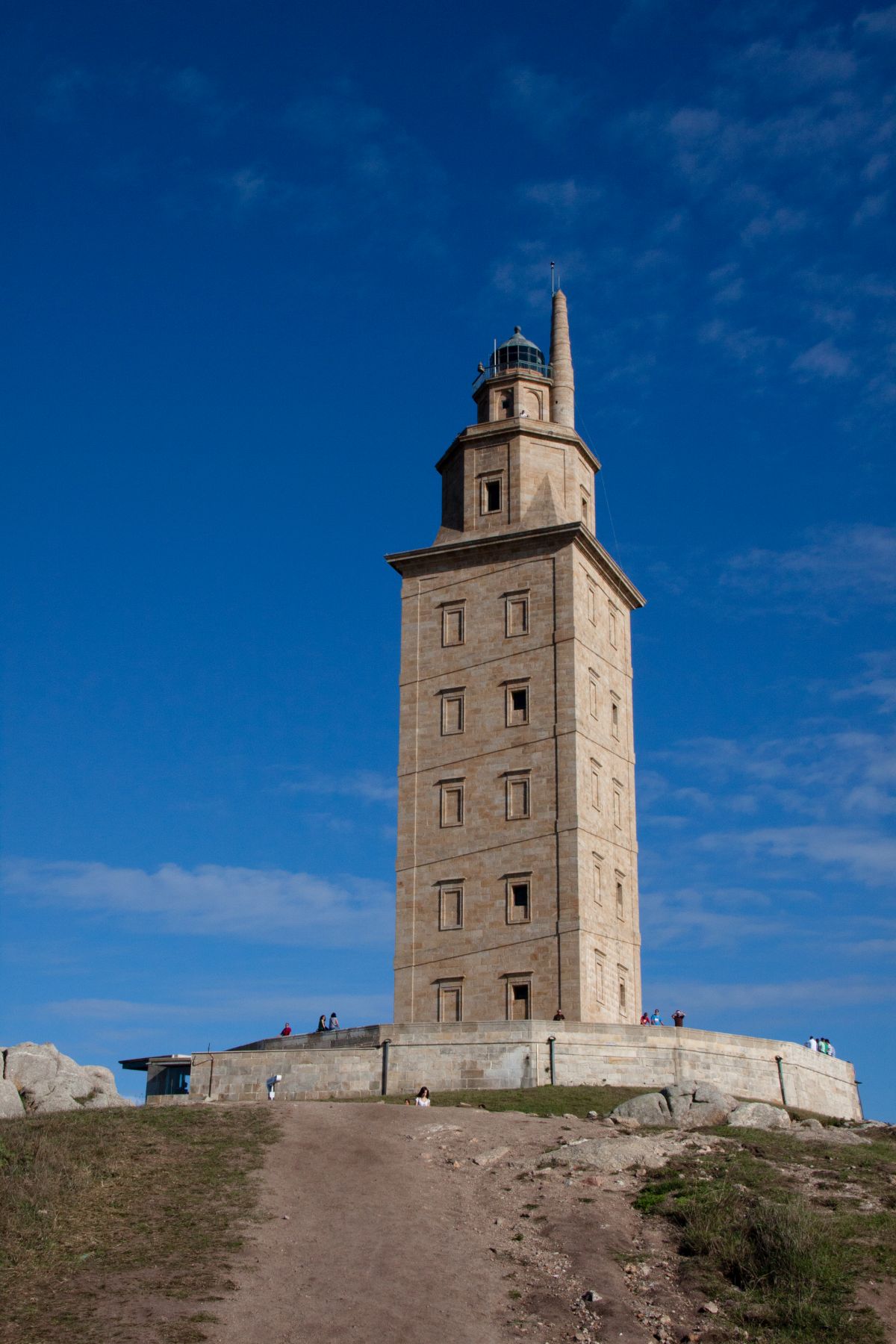 Tower of Hercules in A Coruna, Spain

The Tower of Hercules (Torre de Hércules) is located in Spain, in the city of A Coruna (official name in Galician). The object is amazing because it is the only Roman lantern that has survived to our times, and also the oldest still operating lantern in the world.

Its height is 68 meters due to the reconstruction and expansion of the late eighteenth century, including 37 meters have been preserved since antiquity. So it is one of the tallest buildings erected by the hands of the Romans that we can admire today. According to later legends, its name comes from a Greek hero who came here by barge, and the lighthouse was built in the place where he buried the bones and skull of Gerion, whom he killed during the tenth labor. Coruna is located where the Roman port of Brigantium once stood, from which an invasion of Britain was planned. 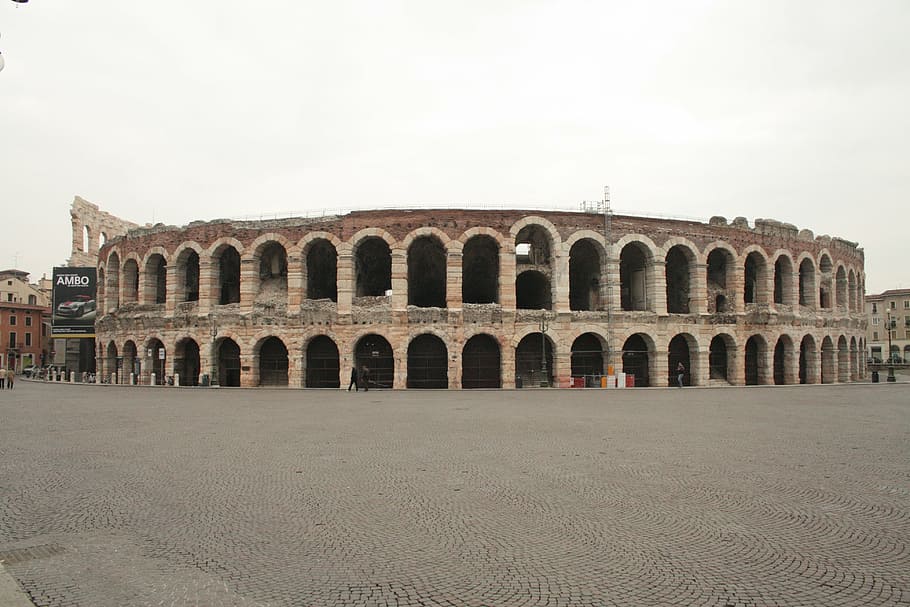 The Roman amphitheatre in Verona (north-east Italy) was built in the year 30 CE, outside the ancient city walls. The facility could accommodate up to 30,000 people and is an example of a beautifully preserved Roman monument.

Despite a strong earthquake in 1117, the building stands to this day. The construction is still used for carrying out cultural events, including opera concerts. Originally, the amphitheatre was built of white and pink limestone, which changed after the aforementioned cataclysm, which collapsed most of the outer structure. 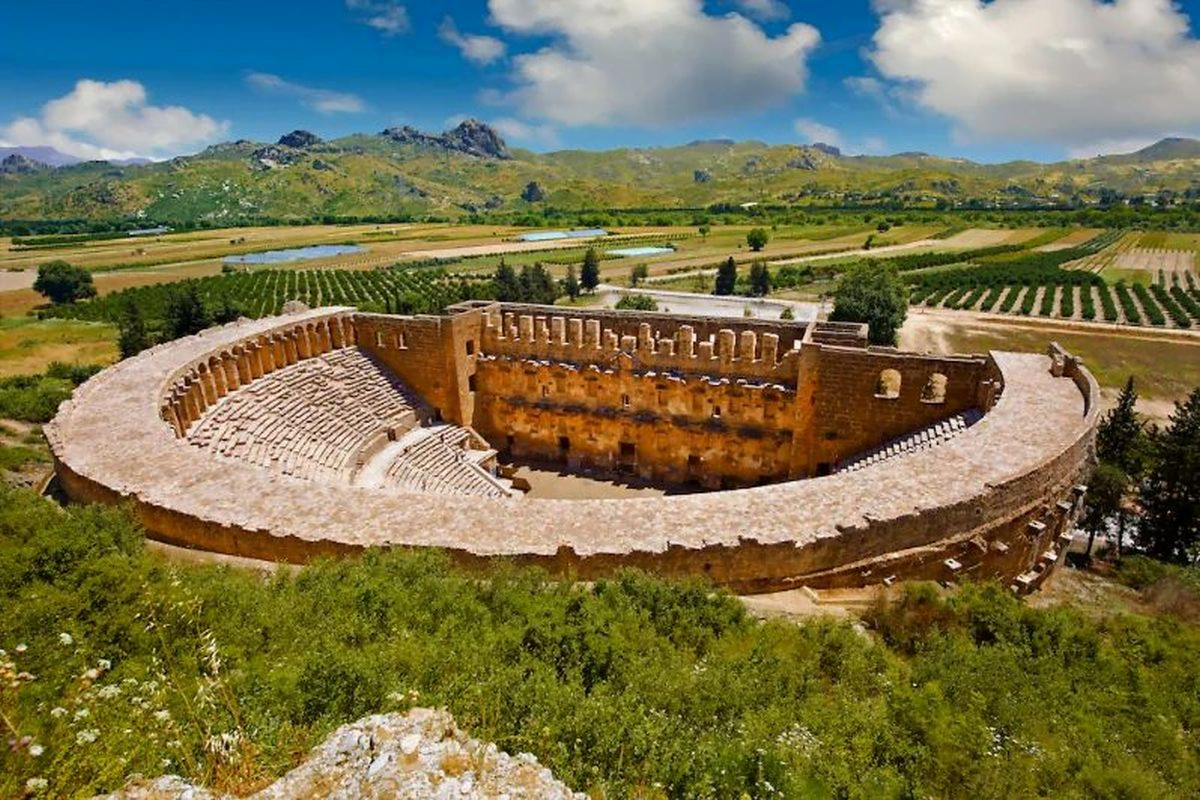 Amazing Roman theatre in Aspendos, in Anatolia (southern Turkey). The facility was built in the middle of the 2nd century CE on a natural slope. This building is the best-preserved ancient theatre in Asia Minor. The building was able to seat 12,000 spectators. 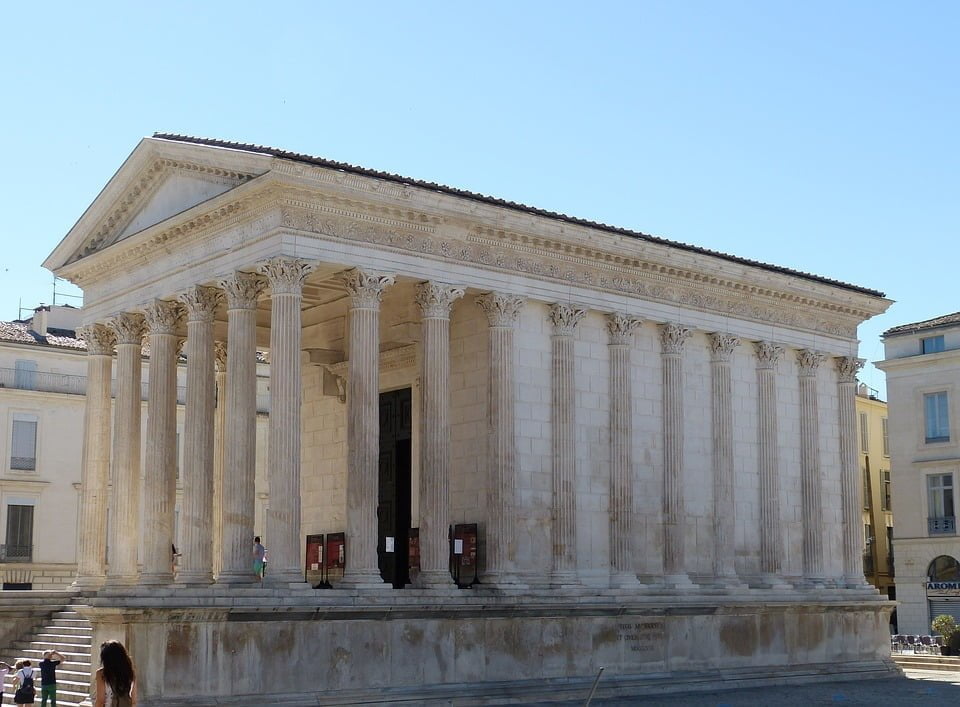 The Roman temple in Nimes (France) is one of the best-preserved Roman sacred objects. The object received the name Maison Carrée, which means from the French “Square House”.

The temple was built around 4-7 CE and dedicated to Gaius and Lucius Caesar, grandchildren Octavian August and his appointed heirs. The facility was erected on a podium almost 3 meters high, which was to emphasize the seriousness and importance of the structure on the forum in the ancient city. The temple from the front has a deep portico based on six tall columns carved in the Corinthian order. The interior of the temple has been deprived of decoration over the years.

The building has undergone many renovations for centuries; the most recent appearance is due to maintenance work in the years 2006-2011. 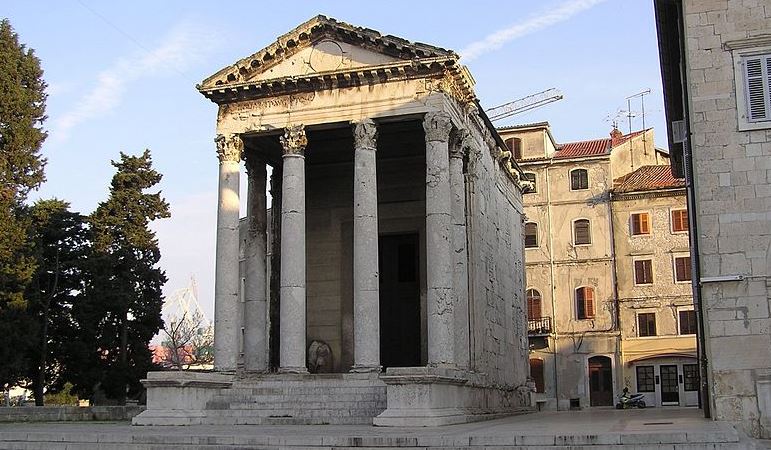 Croatia is one of those countries that has many interesting Roman monuments. One of them is the temple of Augustus in Pula. As the name suggests, it was dedicated to the first emperor Octavian Augustus during his reign (27 BCE – 14 CE).

Like the temple in Nimes, it is situated on a high podium, on which the portico is supported by columns in Corinthian order. The appearance and style of construction is also very similar between the two temples. Both buildings are considered the best-preserved Roman monuments outside of Italy.

The pool also has another treasure – Roman amphitheatre. 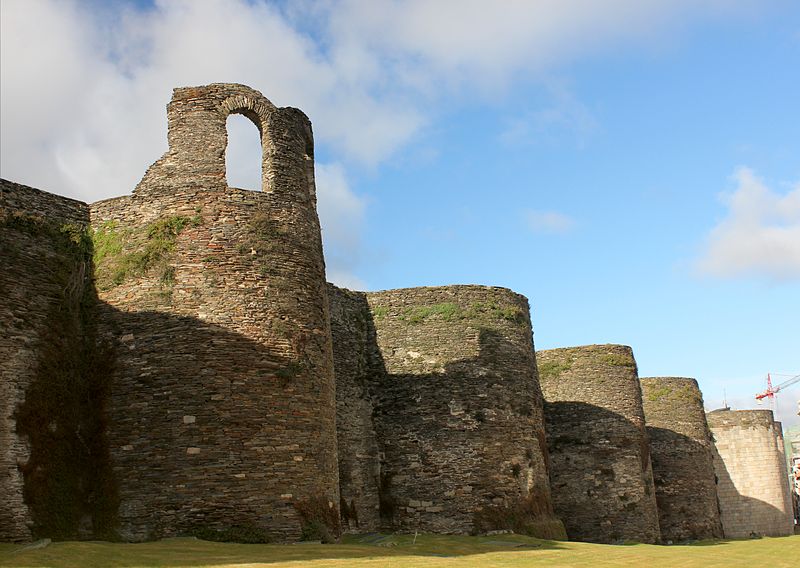 Lugo, a Spanish city, in the northwest of the Iberian Peninsula has amazing remains of a Roman presence. Tourists can admire the still powerful and amazing defensive walls of the 3rd century CE. The walls still stretch around the historic centre of Lugo, and their combined length is 2 km.

The thickness of the walls is about 4 meters, and their height ranges from 8 to 12 meters. Five gates and over 80 towers built in Roman times have survived to our times, which only emphasizes the power of construction. 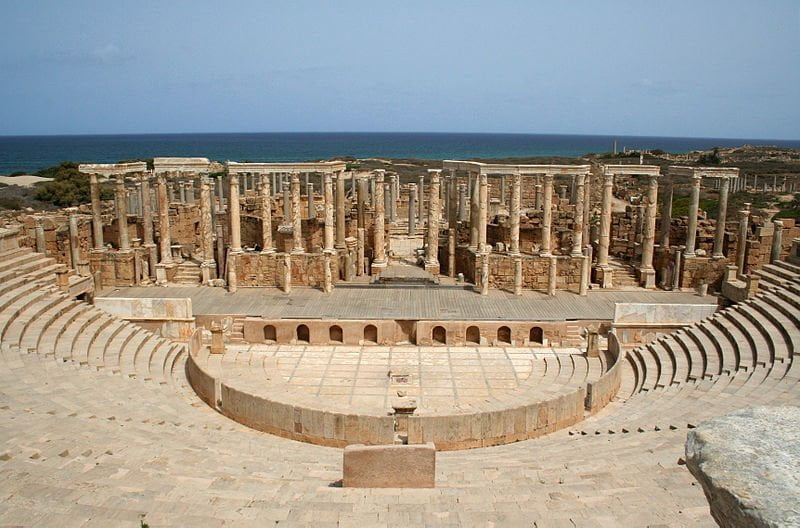 Leptis Magna is currently one of the best-preserved Roman cities. The city was one of the numerous Phoenician colonies and was located on the Libyan shores of the Mediterranean (Tripolitania). The imperial the Severan dynasty came from Leptis Magna (here the future Roman emperor was born – Septimius Severus, who after ascending the throne in 193 CE extended the city and raised its status.

Among the monuments preserved in ancient Leptis Magna are triumphal arches, thermal baths, the temple of Roma and Augustus and, as in many other Roman cities, theatre.

The theatre was founded around 1-2 CE but was expanded and decorated over the years. Ultimately, it could seat up to 16,000 viewers. The building was decorated with numerous sculptures, images of gods, emperors and rich citizens who co-financed the expansion of the place. Behind the stage, structures have been particularly well preserved. 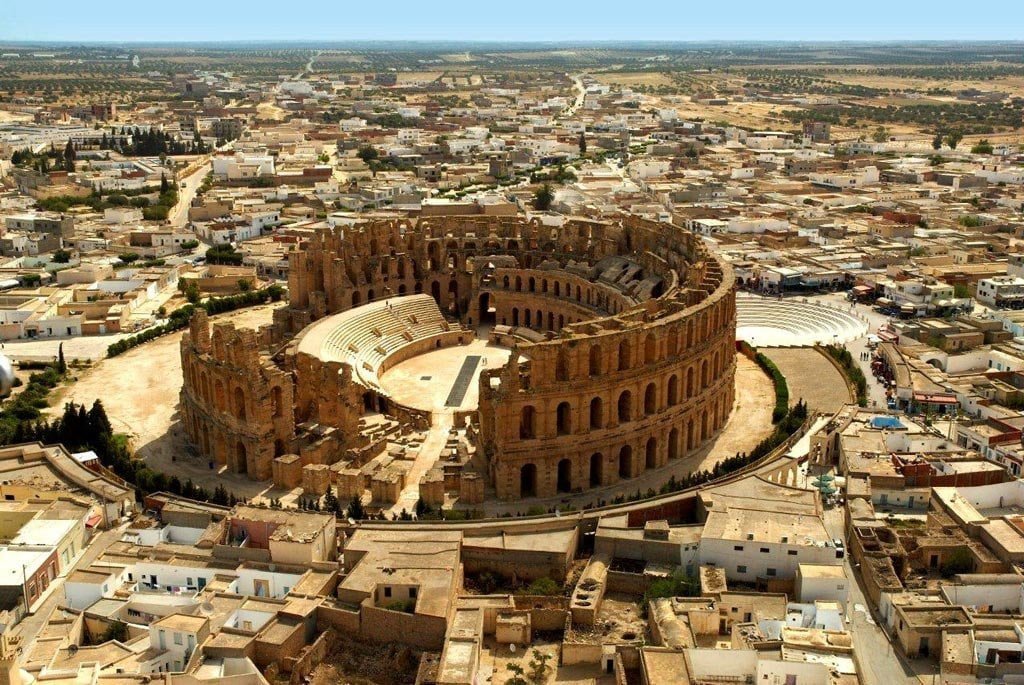 The Roman amphitheatre in El Jam (Tunisia) is one of the best-preserved buildings of this type from the time of the Roman Empire. Established in 230-238 CE, and the initiative to create the object probably originated from the proconsul and later Emperor Gordian I.

The Amphitheater in Jammer could seat 35,000 spectators – so it was smaller than the Colosseum, which had a capacity of about 50,000. In the arena, there were mainly gladiator fights and chariot races. 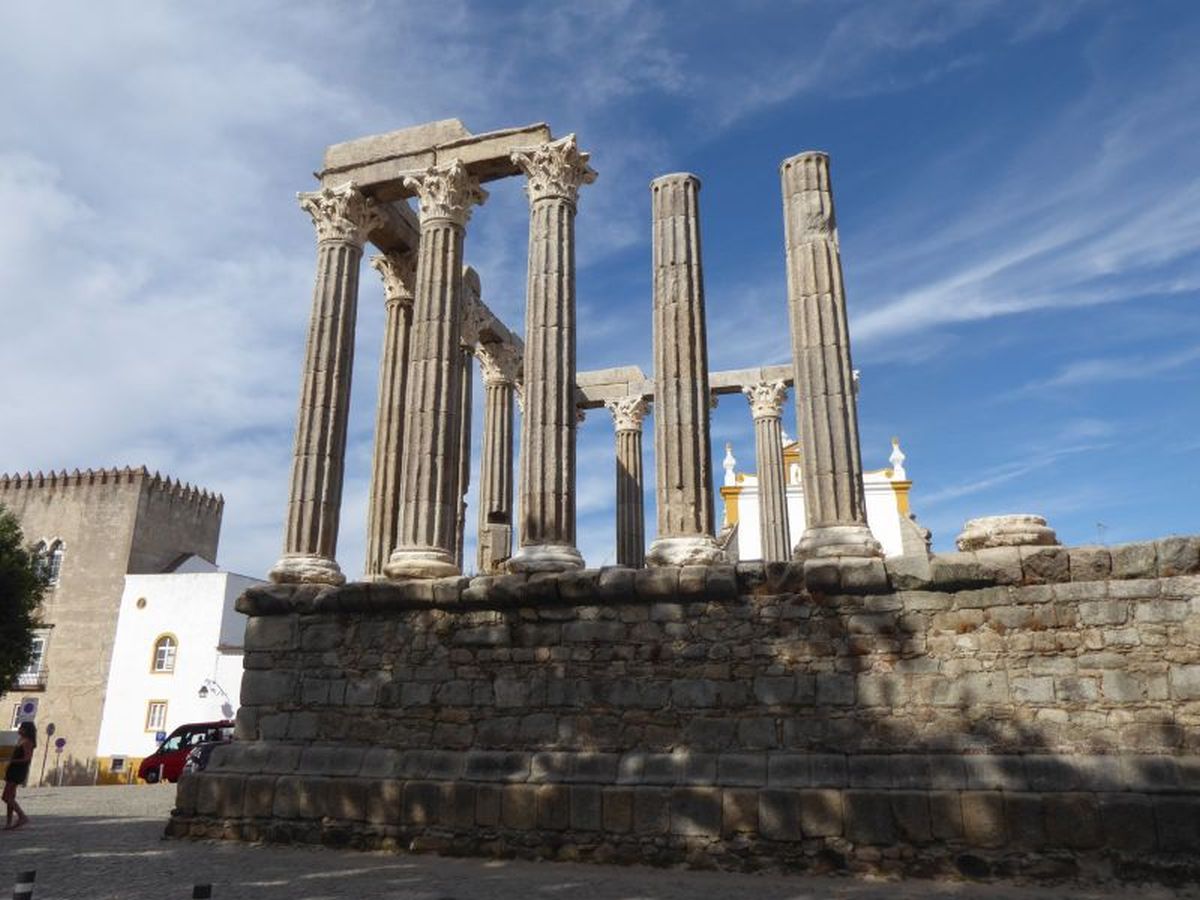 The Roman temple in Evora (Portugal) is also known (erroneously) as the temple of Diana – the Roman goddess of the moon, hunting and nature. The preserved ruins are in very good condition and are a unique object of this type in Portugal.

It is suspected that the building was built in the first century CE in honour of the emperor Octavian Augustus, who was seen as a deity during and after his rule. The temple was established on the forum in the then Roman city Liberalitas Iulia. In the 5th century CE, the building was partially destroyed due to the invasion of barbarians.

Why, however, managed to survive the building in such good condition to our time? In the fourteenth century, the walls and foundations of the temple were used to create the watchtower, and then the tower of the local castle. Thus, the ancient temple has become a defensive structure. Later the building was used as a butcher’s shop. This use of antique construction has allowed it to survive to our times. 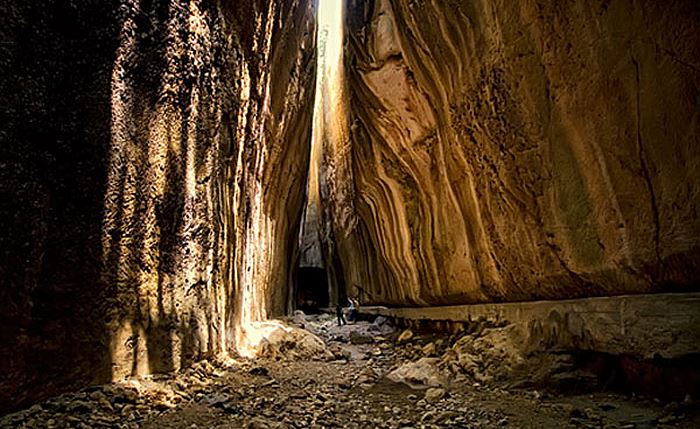 The tunnel of Titus in Turkey

Titus’s tunnel in Turkey is 1.4 km long and was built in the 1st century CE It is proof of the enormous engineering skills of the ancient Romans.

The construction of this tunnel was intended to protect the port near the ancient city of Seleucia Pieria and to protect it from flooding. According to UNESCO, the tunnel is one of the greatest engineerings remains of the Romans in the region, not only because of its size but also ingenuity.