Perseus was Macedonian king, ruling in years 179-168 BCE, and son of Filip V from the Antygonid dynasty. He took care of good relationships with Greece, strengthened the position of Macedon, and tried to acquire allies, this alarmed Rome, which declared war with him. Additionally, the situation was worsened by accusations, which presented, in Rome the Eumenes (king of Pergamon). Multiple deputations of Perseus didn’t bring peaceful results. The decision about war with Macedon was taken long ago and kept secret by the Senat. Romans commanded envoys to leave Rome the same day, and all Macedonians to leave Italy in 30 days. 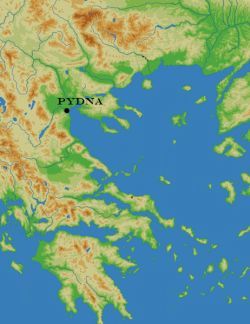 Location of the battle of Pydna

The third Macedonian war started in 171 BCE when Macedonian king Perseus beat an army of Rome under command of Publius Licinius Crassus in the battle of Callicinus. After two years of inconclusive engagements, the Senat appointed Paulus to end the war, who was chosen consul with Gaius Licinius Crassus. When the consul appeared in Greece, he quickly started preparations for the offensive. Roman army set up camp over the Elpeus river, which separated areas of influence of both countries. Romans tried few times to seize the fortifications beyond the river but failed. Paulus made opponents leave comfort positions using a squad of Publius Cornelius Scipio Nasica Corcolum which managed to get to the rear of Perseus’s positions. The King’s army wasn’t endangered directly but he was worried that Romans will seize the important city of Pydna and cut off his supply lines, so he ordered a retreat to the north. Romans followed the king making him fight the major battle, which took place near Pydna on 22 June 168 BCE.

The basic formation of Macedonian soldiers was the phalanx, made by armed in 7 meters pikes, swords, and small shields, fighting inconsistent, close arrays. The frontal attack of phalanx troops was wreaking havoc in all Hellenic world. 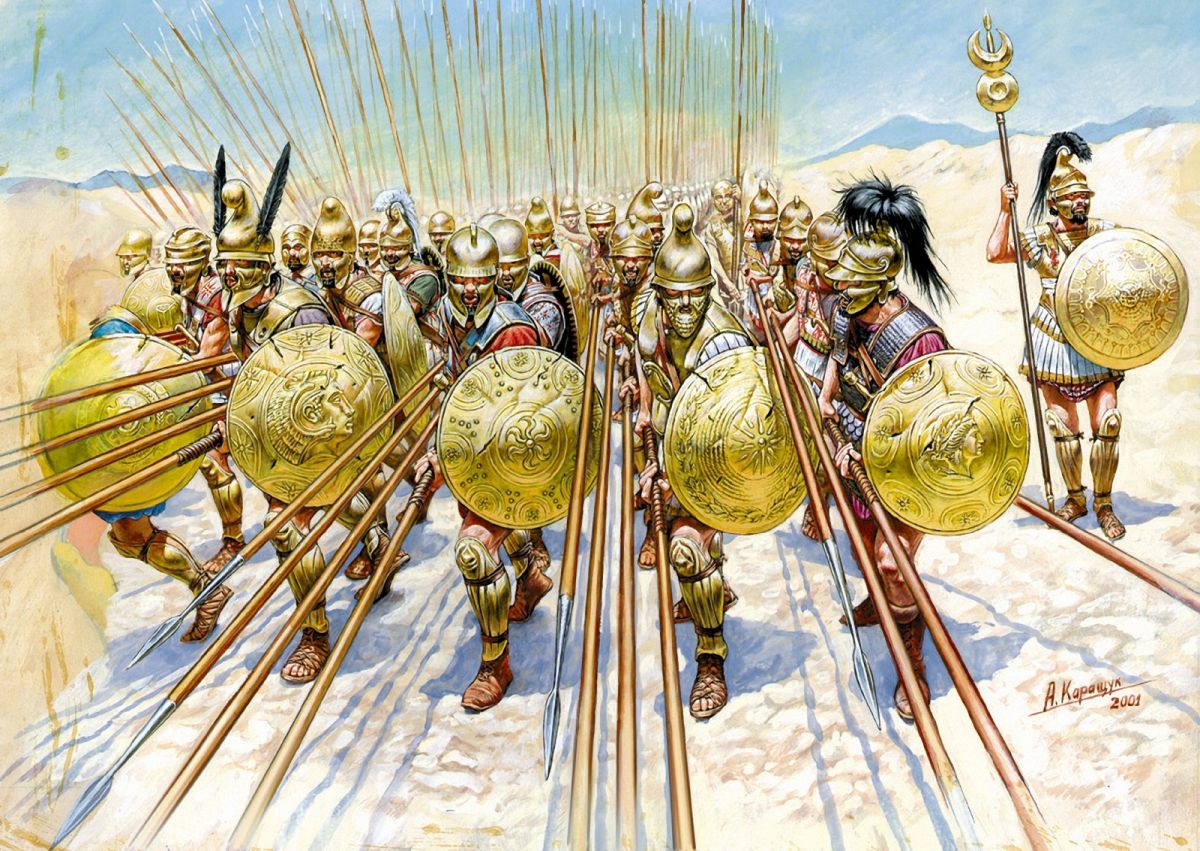 Romans bet on perfectly organized, made of numerous, well cooperating units (centuries, maniples) legions. In the opposite of Macedonians majority of legionaries (principes and hastati) were heavy-armed in javelins (pilum) for throwing and short swords. Romans carried oval shields larger than Macedonians. Poor, light-armed soldiers (velites) were the assistance of basic legionaries lines, they provoked the enemy to fight (generally by firing distant weapons – slingshot). The oldest soldiers (triarii) weren’t armed in javelins, but they had long spears and fought similar to the Greek phalanx. Romans commanders counted on the maneuverability and discipline of their subordinates.

In the night before battle there was lunar eclipse1. Romans, informed earlier about it by astronomer, military tribune Gaius Sulpitius Gallus. Macedonians recognized eclipse as ominous. Earlier their morale was worsened by news about the defeat of ally – Gentius. The consul made an offering to Heracles, the traditional patron of Macedonian kings to raise his soldier’s morale.

Lucius Aemilius Paullus forced Macedonians to fight in difficult terrain. In the beginning Macedonian phalanx stroke frontally the legions, long pikes of phalanxmen stuck into roman shields and both armies connected became for some time unable to maneuver. However, terrain unevenness and Roman fire made holes in the Macedonian lines. Roman units went into them, widening them and shortening them. In that way, the phalanx – unable to attack with long pikes – became defenseless against Romans. The slaughter began. 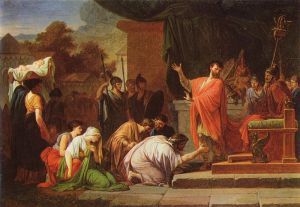 Romans killed 20 000 Macedonians in an hour with relatively small losses (about 1000 legionaries). The Roman military won the battle, as well as the third war.

Perseus escaped the battlefield with 1000 men. Lasting roughly an hour battle of Pydna ended with almost full destruction of the Macedonian army and ended the Macedonian war. The victory was a result of the flexibility of the Roman tactical system. The senate decided that Macedon will fall. Its lands were split into 4 parts, then incorporated into Republic. Many Macedonian aristocrats were taken into captivity. This was the end of the Kingdom of Macedon.

Battle of Pydna brought next changes in the balance of power – fall and destruction of once-great Macedon and following rising of the might of Rome. Domination in Greece, achieved after the victory of Cynoscephalae was strengthened. Theoretically independent states of Greece couldn’t do anything without the knowledge and consent of Romans. In the year 167 BCE Paulus as proconsul brought roman order to Macedon and Greece and looted Epirus, an ally of Perseus. Paulus returned to Rome in glory. Thanks to enormous loot from Macedon and Epirus he celebrated in November 167 BCE a magnificent triumph, in which king Perseus took part as a prisoner.