Didius Julianus was born on January 30, 133 CE. in Milan as Marcus Didius Salvius Iulianus. He was born in a wealthy equestrian family who got rich in trade. Julian did not follow in the footsteps of his ancestors and chose an official and military career. He was probably of Gallic origin (Romanized Gauls), his family was also related to the mother of Emperor Marcus Aurelius. Didius’ mother also included Salvius Julian, a famous lawyer from the times of Hadrian.

Didius grew up in the mother’s home of Marcus Aurelius. Later, thanks to the support of her and the emperor, he owed his first dignities, offices and place in the Senate. Gradually he was entrusted with more and more serious tasks. First, he was to exercise certain functions alongside the governors of Africa and Greece. He later commanded the XXII Legion of the Rhine and defeated the Khatt people. In the following years, he managed the province of Belgium, where he resisted the Chauk invasions. Thanks to these successes, he managed to conquer the consulate in 175 CE. (he held the consulate probably twice).
He also held the governorship in Dalmatia, where he defeated mountain tribes; and in Lower Germania. During the reign of Emperor Commodus, he became the prefect of maintenance funds in Rome. It was then that he was accused by a fleet soldier of plotting against the emperor. However, Commodus, usually very suspicious and strict, treated Didius favourably and found him innocent, thus convicting the prosecutor. After these events, Didius settled for a short time in Milan, then to take over the governorship of Pontus and Bithynia in Asia Minor, and then Africa.

When analyzing cursus honorum by Didius Julianus, it should be emphasized that he was certainly an exemplary administrator and a good commander. He was accused, however, of excessive entrepreneurship in raising money, but also a tendency to waste it. The messages also say about Didius’s adoration for revellers and games.

At the end of 192 CE Emperor Commodus died, and in March 193 CE praetorians killed his successor – Pertynax. According to historian Cassius Dion, nearly 60-year-old Didius learned about it at the feast. The suggestive senator decided to reach for imperial purple himself. To this end, he went to the praetorian barracks, counting on their support in exchange for the promise of high pay. In the barracks, he outbid Praetorian Prefect Emilius Letus, who also wanted to buy power from his subordinates, offering each guard soldier 25,000 sesterces. On March 28, 193 CE an oath of loyalty was given to him, and he pledged to restore the demolished statues of Commodus. The Senate adopted a resolution and recognized Didius Julianus as the emperor by the will of the army, senate, and people. It should be emphasized, however, that the new emperor did not enjoy the support of the people and the senate. With time, legions in the provinces were also to oppose him. 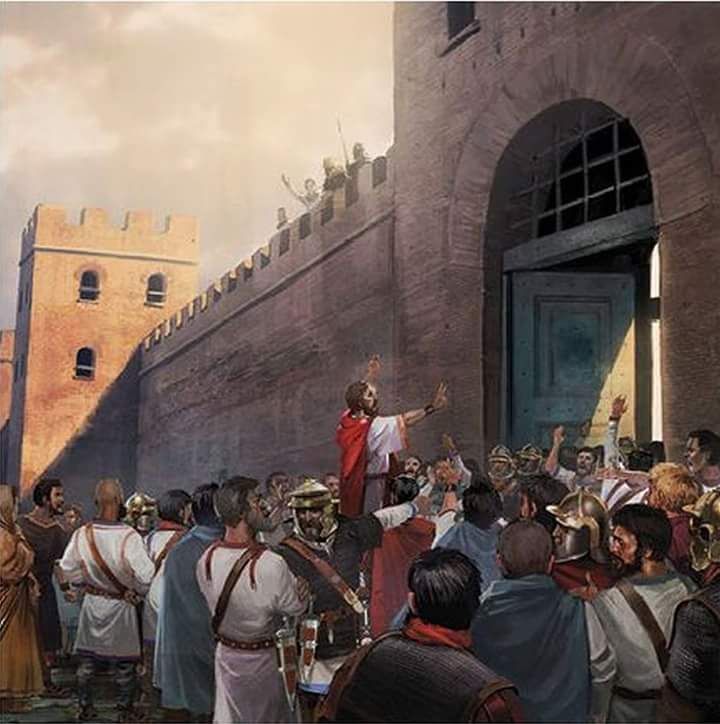 Didius Julianus in front of the walls of Castra Praetoria, where he was also supposed to propose the highest amount for the throne.
Ramón Acedo. Originally the artwork was published in Desperta Ferro

On the outskirts of the empire, the brutal murder of the former ruler Pertynax and the arbitrariness of the praetorians when choosing a successor to the throne were widely criticized in particular. Legionaries who shed blood and sweat across the borders of Rome had enough of unpunished political games in the capital. At the turn of March and April, Emperors of Pannonia – Septimius Severus, Britain – and did a fight against Didius emperors – Clodius Albinus and Syria – Pescennius Niger. All three commanders were appointed by their soldiers. Septimius Severus, whose Danube legions were closest to Italy, was the most agile. Severus headed his legions to Rome; along the way, many cities opened their gates to him, and the inhabitants cheered in his honour.

The hated Didius Julianus had many solutions. He declared Severus a public enemy, sent an assassin to kill his rival and used magic. He even ordered to kill Letus and Marcia, the perpetrators of the murder of Commodus, to please the praetorians. Finally, he gave the order to fortify the capital. The Praetorians, however, switched to Severus’ side when he promised that nothing bad would happen to them if they handed over Pertinax’s killers. Septimius Severus conquered Rome, and Didius Julianus was murdered by praetorians in the palace. Cassius Dion states that Didius said while dying: “But what evil have I done“.

What did gladiators eat?