Domitian was born on October 24, 51 CE in Rome as Titus Flavius ​​Domitianus. He was the son of emperor Vespasian and Domitilla the Elder. Little brother of Titus and Younger Domitilla. He was twice married to Domitia Longina.

He suffered shortages as a child. Chroniclers mention that in his youth he was tall, handsome and had poor eyesight. Over time, however, he gained weight and bald. He avoided effort. He fired the bow very well. He liked to play dice, but he hated poetry and literature. The emperor ate very abundantly and often gave feasts. He was also known for his numerous relationships with various women.

In 70 CE 19-year-old Domitian got into an affair with Domitia Longina, whom he married in the same year. In 73 CE their son was born, he died in childhood. When in 81 CE Domitian became emperor, Domitia received the title of Augusta.
In the year 83 CE she got into a stormy affair with the actor Paris, as a result of which Domitian banished her from the capital. However, it seems that the emperor loved her very much, because he could not stand the long separation and soon brought her back to Rome and restored all the privileges due to her dignity of Augusta.

After Vespasian took power, he took the office of an urban praetor with the rights of consul. However, he did not pay much attention to his office, often avoiding others. Domitian was already abusing power. To match his brother, he undertook an expedition to Gaul and Germania. He did, however, make a small contribution to suppressing the rebellion. After Titus took power, he constantly plotted on him.

He ascended the throne on September 14, 81 CE. after the death of brother Titus. The beginning of his rule was promising. He continued to promote the equites by introducing them to the senate, sat in the Tribunal to control the operation of the judiciary. He condemned the unfair judgments and judges who issued them. He also increased the legionary’s pay by three gold.

He probably overestimated his deeds. Wanting to emphasize his dignity, he even appeared in the senate dressed as a winner. In 84 CE he became a constant censor because he wanted to control his customs.

During his reign in 82 CE he personally led a war expedition against the German tribes of the Khatt tribes, which he defeated and pushed deep into Germany, expanding Agri Decumates, held a ceremonial triumph and adopted the nickname Germanicus in 85 CE.

Also this year, the Dacians invaded Mesia province. On the left bank of the Danube, King Decebalus united the Dacian tribes and attacked Rome. After bringing reinforcements, including one legion from Britain, the Romans started a counterattack ending in defeat (the entire legion V Alaude was destroyed). Domitian arrived personally in the year 88 CE, but in the face of the threat of the invasion of the tribes of Iazyges, Marcomanni, Quadi and revolt, which caused Saturninus, governor of Upper Germany, he was forced to make peace with the ruler of the Dacians in 89 CE He recognized him as king, promised annual monetary subsidies to specialists in defensive fortifications, counting on them as allies against other aggressive tribes. Decebal was to return prisoners of war and give some of his weapons, which he did not do.
In 89 CE a civil war broke out with Lucius Antonius, who proclaimed himself emperor. Despite the fact that the rebellion was quickly suppressed, Domitian became very suspicious. He decided to get rid of political opponents. He killed many. The less threatening neutered or cut off his hands.

In 92 CE the emperor conducted an expedition against the Iazyges, Marcomanni and Quadi. He carried out reforms in the state administration, for high positions in the imperial chancellories, appointing instead of the liberationists of the receipts, he appointed state service with the prosecutors to supervise tax collection (he ended the activity of private publishing companies collecting taxes). He also entrusted senior positions in the army, excluding senators. He completed the construction of the Colosseum. He built new temples. He renovated the Capitol. He rebuilt the Great Circus. Domitian was known for his love of the games. During his time they became very widespread. Amphitheaters were coming. In addition to the previous gladiator fights and killing of wild animals, there were sea battles and gladiator fights. 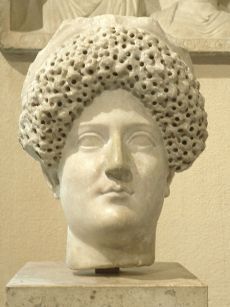 He lowered the price of slaves. He increased the salary of soldiers. However, remembering the rebellion of Antony, he banned two legions from camping together. He forbade castration of men. The courts during Domitian’s rule functioned better, but gave more severe sentences. By imposing penalties on false prosecutors, the number of denunciations has significantly decreased.

When in 88 CE Domitian finally dealt with Decebal, the ruler’s behavior changed. Roman historians say this success changed him a lot. He reportedly introduced the reign of terror. It is believed that he sought to introduce absolute power. He resumed his duty to report on citizens who were a threat to Rome. This procedure was known at the time of Tiberius. Suetonius in his work “Domitian” writes that the emperor was an extraordinary hypocrite. He could praise someone he would crucify the next day. In 90 CE he ordered Cornelia – main vestal – to be buried alive. In the years 89 and 95 CE expelled philosophers from the Apennine peninsula. His hard rule, however, contributed to the reliable collection of taxes in the provinces and the maintenance of discipline in the army.

Domitian became very suspicious over time. Almost always accompanied him guard. He placed many mirrors in his palace so that he could see what was happening behind him. His suspicions were correct. Senators were not favorable to him, moreover, many collaborators. Finally, his wife Domitia entered into a conspiracy with his trusted freedmen and two pretorian prefects.

He died on September 18, 96 CE, when was stabbed in his palace. The people reportedly took the killing indifferently, and the army with great indignation. Nothing helped. Domitian had no children. And anyway, the senators already had a candidate for the throne, who was to be Nerva.
Domitia survived her husband for 30 years, however, claiming to the end Domitia Domitiani, or “Domitia, wife of Domitian.”