The world of ancient Romans abounded in a number of amazing curiosities and information. The source of knowledge about the life of the Romans are mainly works left to us by ancient writers or discoveries. The Romans left behind a lot of strange information and facts that are sometimes hard to believe.

Julius Caesar is one of the greatest leaders in world history. This is evidenced by his victories in Spain (61 BCE), the conquest of Gaul (58-50 BCE), the invasion of Britain (54-53 BCE) or, for example, military campaigns east of the Rhine (55 and 53 BCE). Especially, the expeditions against the Germanic tribes prove how bold and ambitious Caesar was, who for the purposes of the campaign decided on an extremely complicated move for those times – the construction of a bridge over one of the longest rivers in Europe.

END_OF_DOCUMENT_TOKEN_TO_BE_REPLACED

With the addition of Egypt to the Roman Empire in 30 BCE, Augustus saw a number of problems related to the new province. Regular invasions by the Kushites began from the south, and Arab pirates lurked from the side of the Red Sea. In addition, due to the commercial dominance of the Himyarites and Sabaians in the Bab el Manbed strait, the Romans had a difficult opportunity to cruise on this important route to India.

END_OF_DOCUMENT_TOKEN_TO_BE_REPLACED

Many fans of Roman films are astonished by the ideas of the producers that in the Roman army they placed soldiers from different continents. The rule was that only a Roman citizen could serve in the army, i.e. in the Roman legions. However, obtaining citizenship was not an impossible task.

END_OF_DOCUMENT_TOKEN_TO_BE_REPLACED

In the late 2nd century CE, a senatorial decree entered into force allowing gifting the victorious gladiator a reward of 500 sesterces for a fight, if free human and 400 if he was slave. This amount was comparable to the teacher’s annual salary.

END_OF_DOCUMENT_TOKEN_TO_BE_REPLACED

Tents were already in use in ancient times. Ancient Romans used them mainly in marching camps (castra aestiva), which were broken up during military campaigns every day. We owe a lot of information about their construction to the excavations in Vindolanda, near Hadrian’s Wall in England, where leather materials have also been preserved.

END_OF_DOCUMENT_TOKEN_TO_BE_REPLACED

Thinking about the ships of ancient Greece, we certainly see fast and slender triers, with protruding, shiny brown beaks and rowers sitting in three rows, one above the other.

END_OF_DOCUMENT_TOKEN_TO_BE_REPLACED

Decimation (from the word decimatio) was one of the most famous and harsh punishments used against a cowardly or rebellious group of soldiers in the Roman army.

END_OF_DOCUMENT_TOKEN_TO_BE_REPLACED

The best slingshots came from the Balearic Islands, where mothers ordered their sons to shoot the plates with food. The young boys did not eat until they hit the target.

END_OF_DOCUMENT_TOKEN_TO_BE_REPLACED 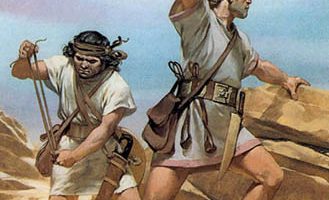 When we hear about Roman soldiers, we see in front of us a well-equipped Jewish legionary fighting in the formation testudo. We do not realize that one of the first types of a warrior in the Roman army was a heavy-armed hoplite who looked completely different from the legionary.

END_OF_DOCUMENT_TOKEN_TO_BE_REPLACED

Life in the army has always been hard and required soldiers to have strong will, perseverance and physical strength. Long and demanding marches caused that the soldiers tried to diversify time in various ways, including singing. Did Roman legionaries do the same?

END_OF_DOCUMENT_TOKEN_TO_BE_REPLACED

Your financial help is needed, in order to maintain and develop the website. Even the smallest amounts will allow me to pay for further corrections, improvements on the site and pay the server. I believe that I can count on a wide support that will allow me to devote myself more to my work and passion, to maximize the improvement of the website and to present history of ancient Romans in an interesting form.

News from world of ancient Rome

If you want to be up to date with news and discoveries from the world of ancient Rome, subscribe to the newsletter.

I encourage you to buy interesting books about the history of ancient Rome and antiquity.