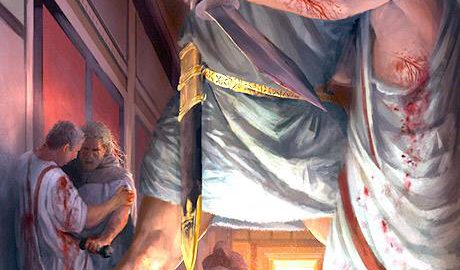 The tyranny and mad rule of Caligula caused that Roman people and elites honestly hated the Emperor and feared for their lives. The most important people in the state were humiliated: for example, the consul Publius Pomponius Secundus was to shoe the emperor’s shoes while watching the spectacle. The emperor at every step also mocked high-ranking officers. Among them was i.e. Cassius Chaerea and Cornelius Sabinus.

Caligula mocked Cassius and his high, female voice, which clearly did not match his powerful, athletic stature. Sabinus was also often the object of the perverse and insulting whims of the emperor. Hidden hatred turned into a conspiracy, at the head of which Chaerea and Sabinus were standing. Suetonius states that on the morning of January 24, 41 CE there was played Laureolus of Lutatius Catulus and the tragedy Cinyras, which were watched by crazy ruler. What the Roman historian emphasizes – the same plays were played on the day of the assassination of the Macedonian king and Alexander’s father – Philip II of Macedon.

Participants of the action were to wait for Caligula, when he would come back for dinner from the theater. They decided to attack him in the narrow corridor of the underground gallery of the palace. Only there, it was possible to surprise the emperor, not allowing the guard, consisting of Germanic warriors, to intervene quickly. The conspirators, however, had to wait, after the end of the performance, the emperor stopped behind the scenes and talked with several actors about the next performance, which was to take place in the afternoon.

When Caligula finally left the actors and set out for dinner, the assassins attacked the hated ruler. Chaerea cut the emperor with a sword in the shoulder, and Sabinus brought him down on his knees. Then the other attackers rushed on him. They gave him about thirty knife thrusts. The two porters of the litter and the German guards, who the conspirators have defeated, tried in vain to defend the ruler.

After the killing of Caligula, the empress Caesonia and the daughter Iulia Drusilla were found. Both died: the wife was pushed into the stomach, and the head of a two-year-old child shattered against the wall. After all, the conspirators were sentenced to death on the orders of Claudius (probably on the advice of advisers), not to create a precedent for killing the emperors. The deed was deemed glorious, but disloyalty had to be punished, discouraged to repeat. Executions, at the request of Cassius himself, were made with the same sword, which mortally struck Caligula. The power was taken over by Claudius, who was proclaimed an emperor by the Praetorian Guard, and then recognized by the Senate.