The Empire has officially been divided into two periods: Principate (from 27 BCE until the end of the third century CE) and dominate (from IV century to 476 CE).
The first system was shaped by Augustus, grandson of sister of Julius Caesar. He built a specific political system, in which the emperor focused his full power, with the appearance of preserving republican institutions. This was primarily to avoid the appearance of returning to the “hated” monarchy. Augustus enlarged the country’s property with Retia and Noricum (15 years ago). After his death, Roman emperors based their authority on the army and praetorians (who often chose and overthrew the rulers). In I century CE Rome conquered Britain, in the second century – Dacia and Arabia.

During the rule in the Roman state, four great dynasties ruled: Julio-Claudian, Flavian, Nerva–Antonine and Severan, and dominate 3 smaller ones: Constantinian, Valentinian and Theodosian. 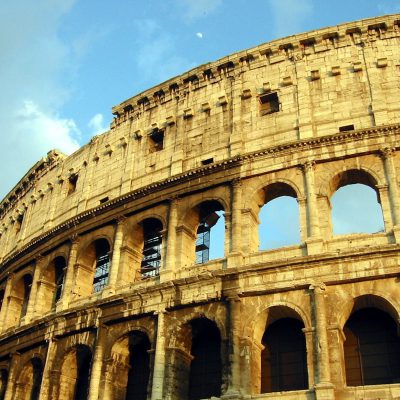 Colosseum was a symbol of the Roman Caesars’ power.
Under Creative Commons Attribution-Based License - Under the Same Conditions 3.0.

In 213, e.e. Roman citizenship was granted to all free inhabitants of the empire. The rulers promoted the cult of the emperor; in Rome, Eastern religions, including Christianity, developed.
After the death of the last member of the Severus dynasty in 235 CE the period of usurpation, civil wars and internal chaos began. The state was experiencing an economic crisis, and moreover, the threat from the barbarian tribes increased. The cure for this situation was the introduction of a new regime, dominate.

Emperors: Diocletian and Constantine the Great carried out systemic reforms, as a result of which the state became a monarchy absolute (dominate). In 313 CE Constantine the Great admitted to Christians freedom of religion and equality with the official religion. In 395 CE (after the death of Theodosius I), the state was divided into the Eastern Empire (with the capital in Constantinople) and the Western Empire (with the capital in Rome).

Dominate completely destroyed the appearance of the republic, handing full power to the emperor. Diocletian is considered to be the father of this form of government, although the transformation process was started already in the middle of the third century. Reforms introduced in the state allowed it to continue uninterrupted until the end of the fifth century BCE when all the parties attacked and divided in the Roman state had to succumb.

The fall of the country dates back to 476 CE, which is associated with the conquest of Rome by Odoacer and the overthrow of the last emperor of the Western Roman Empire, Romulus Augustulus. 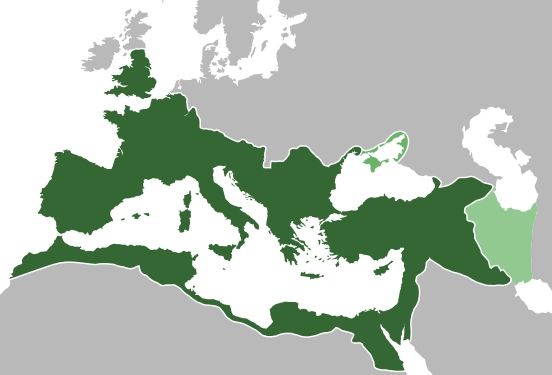 Roman Empire in 117 CE, at the height.
licensed under Creative Commons Attribution-ShareAlike - Under the same conditions 3.0.

Reason is not measured by size or height, but by principle~Epictetus