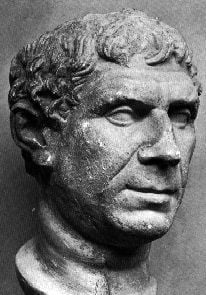 Ennius was born in 239 BCE in Rudiae (Apulia) as Quintus Ennius. He was a Roman poet, considered as the father of Roman poetry. Only fragments of his work have survived to our times.

He came from Calabria. The city where he was born – Rudiae was an Oldo-Roman center founded by Messapia. Languages ​​in this region were Oskise, Latin and Greek. Gellius, a writer from the second century CE, wrote that Ennius had “three hearts” (Quintus Ennius tria corda haba sese dicebat, quod loqui Graece et Osce et Latine sciret).

He fought in Sardinia during the Second Punic War, where he met the Cato the Elder with whom he came to Rome. He worked there as a teacher and poet. He received Roman citizenship for his services in literature.

Till our times have survived 20 titles and tragedies of Ennius. His most important work was the historical epic called Annales, written in 18 books, and containing a poetic vision of the history of Rome since the arrival of Aeneas in Italy. It was the first major Latin work written with a date hexagon, which he introduced in the poem Ennius into Latin poetry. About 600 poems remain from Annales, including incipitus of the first book Musae quae pedibus magnum pulsatis Olympum.

Until the creation of “Aeneis”, “Annales” were considered a national epic of the Romans. Peaks of popularity reached in the second century CE, the “silver” period of Roman literature, when archaic patterns were used to rejuvenate the language. The loss of Annales is probably due to the sudden and irreversible outflow of this fashion in the 3rd century CE.

In addition, Ennius was involved in the adaptation of numerous Greek dramas and comedies, mostly from Euripides. He was the first to write Roman epigrams. He also wrote the work Saturae, which contained a collection of various content and metric measures.
Interestingly, Ennius considered himself the incarnation of Homer.