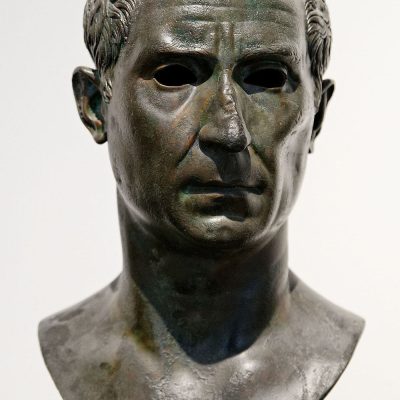 Probably before he became consul, Pizon was the proconsul of the province of Gallia Transpadana, where he presided over a murder trial in Milan. The culprit was defended by the orator Gaius Albutius Silus, a citizen of Novara. His eagerness in defence led to such stormy applause from the overcrowded court that the lictors, despite their efforts, failed to maintain order in the forum.

In 15 BCE Pizon was elected consul along with Marcus Livius Druzus Libon. Shortly before or after his consulate, he campaigned against the Windeliks. They were a people of Celtic origin who inhabited the northern Retia between the Danube, Inem and the Alps. It was at this time that he was conquered by Tiberius and Drusus.

In the years 13-11 BCE or 12-10 BCE, Piso waged battles against the Thracians. At that time Vologezes, leader of the Bessi tribe, rebelled with his followers. He defeated and killed in battle Reskuporys II, the ruler of the Sapaj tribe, and forced his uncle, Remetalkes I, to flee. In pursuit of him, he invaded Chersonesos Thracian, where he caused great havoc. Due to these events, Piso, who was then governor of Pamphylia and possibly of Galatia, was ordered to go against him. When the Besses heard that the Piso was approaching, they retreated to their homeland. Then the Pisces entered their country, and although he was defeated at first, he conquered them one by one and ravaged both their lands and the lands of the neighbouring tribes that joined the uprising. Within three years, fighting both outside the city walls and in the open field, carving masses of enemies into the trunk, the Piso forced all these tribes to surrender. By putting an end to the uprising he was also restoring Asian security and the peace of Macedonia. For these successes, he was awarded supplications and triumphal badges (ornamenta triumphalia). Then Remetalkes I received from Augustus the lands of his deceased nephew, along with some allowances, so that he became king over all the people of Thrace.

If the Lapis Tiburtinus (fragment of the tombstone of an unknown Roman senator from the time of Augustus) speaks of Piso, then he was then the proconsul of Asia and legate of Syria. His rulership of Asia would have placed such a position in 9/8 BCE or 8/7 BCE, and governorship of Syria in 4-1 BCE One of the epigrams of Antipater from Thessalonica is quoted in support of the governorship of Asia by Piso Pontifex, but it is not unambiguous. The inscription of the governor of Asia from Stratonicia in Caria speaks of Lucius Calpurnius Piso, but it is probably related to Lucius Calpurnius Piso Augur, who is known to be the proconsul of Asia. There are also two inscriptions (from Hierapolis-Kastabala in Cilicia Pedia and unpublished from Ojnoanda in Lycia) which mention Piso as legatus pro praetore and honour him as a benefactor and patron. The first is sometimes cited as confirmation of the governorship of Syria by Piso Pontifex, but it is also possible that he is referred to as a legate of Galatia-Pamphylia and not of Syria, just as undoubtedly the second inscription may refer only to the governorship of Galatia-Pamphylia. Ronald Syme, on the other hand, believes that the Hierapolis-Kastabali inscription may also refer to another Lucius Piso.

For fifteen years, from 17 until 32 CE, Piso was praefectus urbi (commander of the city guard) and his job was to maintain security in Rome. It was widely believed that he was given the position because he was to feast and drink with Tiberius continuously for two days after he became emperor. According to Seneca, Pizon was drunk constantly from the first time he got drunk. He would spend most of the night revelling and then sleep until nearly six o’clock. This was how each morning was supposed to be. At the same time, however, together with Tacitus and Welley Paterkulus, he emphasizes that he performed his service as accurately as possible, being the prefect of the city. He never uttered servile sentences for his own benefit, and when the situation forced him to do so, he knew how to dose them wisely. It was the gentle exercise of this office, and not the honour of the triumph which he deserved in Thrace, that was the prime title to his fame. Suetonius and Flavius ​​Joseph incorrectly define the time when Piso was the prefect of the capital.

Antipater of Thessalonica, acting in Rome as a teacher of philosophy, was a client of Piso. As an ambassador for his hometown, he was sent to him and offered Pizon a poem celebrating his victory over the Bess. Apparently, Piso was pleased with what he heard, because Antipater joined his circle of friends and, with over a hundred of his epigrams, he mentioned Piso in many.

According to Pomponius Porphyry, it was to this Pizon and his two sons Horace addressed his letter “On the art of poetry” (De arte poetica). Porphyry also wrote that Pizon was himself a poet and protector of the liberal arts. Recently, however, scholars agree with the opinion of philologists from the nineteenth century, who saw the addressees in the person of Gnaeus Calpurnius Piso, consul in 23 BCE, and his sons: Gnaeus Calpurnius Piso, consul in 7 BCE and Piso Augur, consul in 1 BCE.

Likewise, the saying of Octavian Augustus quoted by Plutarch applies to one of the above Pisons, although it is not known exactly to which. When Piso built the house with great care, from the foundations to the roof, Augustus said to him: You give me great joy, building in this way as if Rome were to be eternal.

Piso died a natural death in 32 CE. being a high priest, which was rare at the time in such a dignified position. After the fall of Sejanus in 31 CE for many people were killed by Tiberius forties, real or imaginary, to him. Under a resolution of the Roman Senate, Pizon was honoured with a public funeral.