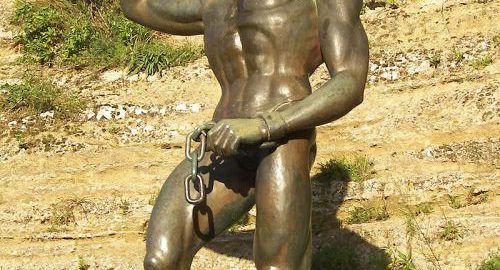 Eunus was a Roman slave of Syrian origin who was the leader of the first slave uprising in Sicily (135-132 BCE). According to Florus’s message, Eunus swore to the Syrian deity Atargatis (which he compared to Greek Demeter) that he would free slaves from oppression.

A certain Syrian named Eunus (the seriousness of our defeats causes his name to be remembered), counterfeiting an inspired frenzy and waving his dishevelled hair in honour of the Syrian goddess, incited the slaves to arms and liberty on the pretence of a command from the gods.

He considered himself a prophet, and even to improve the effect of his statements, he put a nut in his mouth, filled with burning sulfur, to imitate the flame of fire. In this way he wanted to authenticate his anointing by the gods.

At the begining, under Eunus command, was two thousand fugitive slaves. This number, however, increased with next victories to over 60, 000. Eunus certainly established some germ of statehood, as evidenced by the discovery of archaeologists from the city of Enna – a coin with the inscription “King Antiochus”. Eunus was to proclaim his subjects “Syrians.”

Finally, the rebels were defeated by praetor Marcus Perperna. As Florus says:

At last punishment was inflicted upon them under the leadership of Perperna, who, after defeating them and finally besieging them at Enna, reduced them by famine as effectually as by a plague and requited the surviving marauders with fetters, chains and the cross. He was content with an ovation for his victory over them, so that he might not sully the dignity of a triumph by the mention of slaves.

After the victory, Perperna received the right of ovation in Rome.