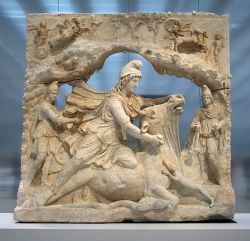 From the beginning of our era, the cult of Mithra spread in the Roman Empire, where he was portrayed as the killer of a bull. In the photo, there is a relief showing Mithra at the time of the act.
Author: Jean-Pol GRANDMONT | License Creative Commons Attribution - Under the same conditions 3.0.

Mithra (Mithra), also called Deus Sol Invictus Mithra. He was the Persian sun god. In Persian mythology, he was considered a helper of Ahuramazda. The cult of Mithra was celebrated in caves carved out of the rock. Various animals were sacrificed to him and then eaten. Mithra was portrayed as a young man in a tunic, with a Phrygian cap on his head, killing a bull.

Mithra was born on a rock on December 25. He became famous for killing a bull, which the god of the sun himself ordered him to kill. He did this by first bringing him to a cave, and then piercing him to the right side. In memory of this event, the followers of Mithra carried out a bloody sacrifice (tauroctonium), which symbolized the salvation of all people.

His Roman holiday, December 25, Sol Invictus, was then by Christians adapted as Christmas, and his holy day, Sunday, as the holy day of Christians. It is worth noting the Christian hostility to worship Mithra. It resulted from the fact that the followers of Mithras and Christians recognized a shared supper and sharing bread and wine. Justin Martyr wrote about it: “Wherefore also the evil demons in mimicry have handed down that the same thing should be done in the Mysteries of Mithras. For that bread and a cup of water are in these mysteries set before the initiate with certain speeches you either know or can learn”.

The cult of Mithras in Rome began to spread in the first century CE during the reign of the Flavian dynasty (Flavius ​​Dynasty)” href=”/?page_id=612″>the Flavian dynasty. His first cult headquarters was in the basement of the present basilica of Saint Clement (San Clemente) in Rome. The cult of Mithra, the greatest believers, won among merchants, prosecutors and other people whose profession required constant movement from one corner of the Empire to another. From the 2nd century CE, the cult spread to every corner of the Empire. As the first ruler of Rome, Commodus showed him the most interest. In 308 CE, Galerius, Diocletian and Licinius, made him their guardian.

The cult of Mithra was highly elitist and exclusive, which basically closed his way to the masses. He was particularly popular with legionaries. We find traces of the cult of Mithras everywhere legions were stationed – from the shores of the Black Sea to Britain and the Sahara desert. It was the soldiers, constantly moving around the Empire, that became missionaries of Mithras. Scientists, having assessed the relics with inscriptions, concluded that the main followers of Mithras were merchants and soldiers.

The ceremonies of the Mysteries were held either in caves or in cellars – the most important was to perform rituals in a closed and light-insulated room. The ritual was attended by men who underwent subsequent stages of initiation (in a seven-stage process). The whole ritual was strongly associated with astrology and led to overcoming human vices, liberating the soul and returning to Empireum – the ideal world of eternity and permanence.

The cult of Mithras was particularly popular in the 3rd century CE when subsequent emperors were chosen by their soldiers. At the turn of the 3rd and 4th century CE, the cult of Mithra was included in the state religious canon in Rome but was soon eliminated by hostile Christians. Mysteries of Mithras were the most popular cult of the Empire, which competed with Christianity until the third century CE It was not until 324 CE that Constantine the Great forbade the cult of rituals that in 341 CE the sons forbade blood sacrifices. 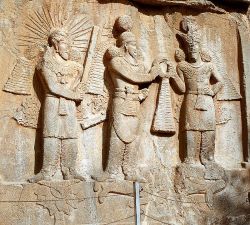 According to his followers, the young god was to be a small, local miracle worker that most people underestimated. However, he had the gift of healing, thanks to which he healed many people, including Prince of Elam. When his wedding came, the prince invited Mithra as a special guest. Unfortunately, the wedding ran out of wine. The wedding couldn’t go without wine, so the prince began to panic, but Mithra ordered calm down and give him barrels of water. The prince did not understand this order but decided to give Miter water. After a moment of concentration, the young god turned the water in the barrels into wine and gave it to the wedding guests who drank and had fun until dawn.

Despite all these joyous deeds and miracles, Mithra had his eternal enemy on earth, the son of the ruler of darkness, who was lurking for his every evil step. He kept sending assassins and other bandits on him, but Mithra miraculously converted all of them from the wrong path and took them as his sheep – because Mithra was known to the majority as a mere shepherd. After all, the son of the ruler of darkness could not stand, turned into a bull and personally attacked Mithra. There was a catastrophic fight – although Mithra managed to twist the bull’s neck, but he was seriously wounded. This scene, known as Taurokontos, was most often depicted in Mithra’s graphic performances. Soon Mithra died and was buried by his students.

However, nothing can last forever. The guard placed at Mithra’s grave after three days with panic came to the Prince of Elam and told him that Mithra had risen from the grave and went east. The prince, afraid of this news, did not know what to do, but he renounced Mitry and decided that he did not want to have anything to do with him. Three times they tried to ask him for an explanation, but he denied him three times.

Mithra appeared to his disciples for the last time, explaining to them how to achieve salvation for their soul and how to receive the grace of communing with the heavens after death. Immediately after this revelation on one of the highest peaks, Mithra rose into the air and ascended into the sky alive. Students set off to spread the truth about Mithra and urge the infidels to worship the risen god.

Reason is not measured by size or height, but by principle~Epictetus