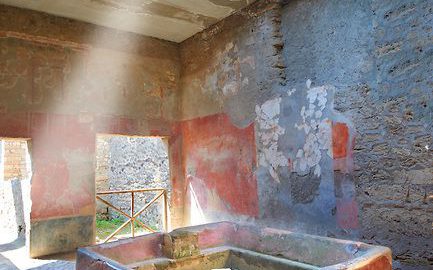 Roman stone "bathtub" in which fullers worked. Located in Pompeii

Stone “bathtub”, where the foiling took place (the so-called fullonica), ie the smoothing of the fabric; cleaning or wiping. The property is located in the house of a man named Stephanus on Via del Abbondante in Pompeii.

Romans usually wore brightly colored woolen clothes due to the warm climate of Italy. To achieve such a “mute” of the color of the fullones they trampled the material in such wells.

Ancient Romans did not know soap and used other methods known to them to remove dirt. Among other things, male or animal urine was used, which was mixed with water. Soiled material was wiped in such a liquid. Even then, it was known that ammonia in urine would bleach the material.

There was no need to worry about the “delivery” of new portions of urine because pots were simply picked up from the street and passersby urinated them. We know, for example, from Suetonius that Emperor Vespasian introduced a urine tax – urinae vectigal.

Can anyone be proved innocent, if it be enough to have accused him?~Julian the Apostate