In the olden days, a man named Julius (known also as Ascanius), a descendant of Aeneas, founded his own city, Alba Longa, in which many kings ruled after him. The last of them, Prokas, had two sons. One, Numitor settled on the throne, and the other, Amulius quickly knocked him down and imprisoned him. In an attempt to secure this throne, son of Numitor, he murdered as a legitimate successor and made his daughter Rhea Silvia a vestal so that she would not give birth to an heir.

Rea Sylwa, however, fell victim to rape by Mars during service. Vestal initially concealed its condition, but the secret could be hidden until. Numitor’s daughter was imprisoned and sentenced to starvation, and her twins, Romulus and Remus, ordered Amulius to drown in the Tiber. However, this intention failed. The servants put them in the basket and let them go with the flow of the river. The boys’ basket, thrown into the water, went with the flow and caught on to the tree trunk in one of the bays. The flooding of the river took the basket to the Palatine Hill. The children were saved. 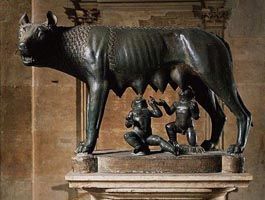 Capitoline She-wolf was the symbol of the capital of the ancient Roman Empire. According to legend, the animal was to take care of and feed Romulus and Remus.
On Creative Commons Attribution license - On the same terms 3.0.

A she-wolf heard the children cry and regularly fed their own milk to the children. According to some sources, the god of thunder, Zeus, has changed into a she-wolf. But the animal also had its own children, and as she brought the twins little milk, Mars let go of the woodpecker, who was dropping forest fruit.

The story persists that when the floating basket in which the children had been exposed was left high and dry by the receding water, a she-wolf, coming down out of the surrounding hills to slake her thirst, turned her steps towards the cry of the infants, and with her teats gave them suck so gently, that the keeper of the royal flock found her licking them with her tongue. Tradition assigns to this man the name of Faustulus, and adds that he carried the twins to his hut and gave them to his wife Larentia to rear. Some think that Larentia, having been free with her favours, had got the name of “she-wolf” among the shepherds, and that this gave rise to this marvellous story.

She was once traced by the royal shepherd, Faustulus, who found a basket with the children and adopted them. Together with his wife, Akka Larentia, also called Lupa (“she-wolf”), he cared for their development. The boys grew up brave young men and excellent warriors.

When Romulus and Remus reached adulthood, they decided to go to Alba to celebrate the Lupercal festival. Returning home after having fun, they took part in a fight between the shepherds of Numitor and Amulius, taking the side of the latter’s service. Then Remus was kidnapped and led to Amulius, accusing him of assaulting Numitor’s estate. This fact did not arouse interest in Amulius. He decided to send the villain to Numitor. Remus told him his whole story, and the former king met his grandson in it and told him to bring Romulus to overthrow Amulius together.
Amulius paid his mistake with the highest price. Together with imported Romulus and armed husbands, Remus knocked Amulius off the throne and put Numitor on him again. 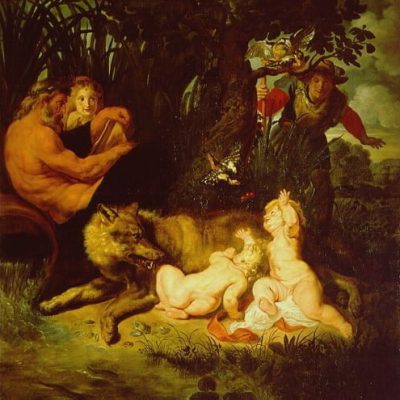 The twins killed him and, on the advice of their grandfather, left the city and decided to establish a new settlement, where they were saved. The conflict between the brothers grew from the moment they decided to decide who would have the privilege of naming the new settlement. The gods settled the dispute. The law was to be given to the brother who would see more vultures in the sky. Remus, who was on the Aventine Hill, showed 6 birds, while Romulus, who occupied the Palatine Hill, saw 12 birds, which expressed the favour shown to him by the deities.
The chosen one has chosen the space and thus marked the boundaries of future Rome. When Remus jumped over this line, his brother as king of the city killed him for violating his territory.
Romulus recognized himself as an independent master of the city, named after him, Rome. The new ruler took help from 12 voters and established a Senate with 100 representatives of the people.

Because the group inhabiting Roma was few, the king appointed a grove called asylum and considered it a place where everyone obtains the right of immunity, even the greatest criminal.
The greatest thugs came everywhere. But there were no women in Rome, which did not allow the development of the settlement. Romulus thought he would organize the games. He sent invitations and future husbands with wives and daughters. The women were taken to dance, and as a sign of Romulus, every thug kidnapped the woman who stood by him. This event was called the kidnapping of Sabine women.
As you might have guessed, the fathers and brothers of the kidnapped women could not forgive the Romans and decided to rescue the women. Mainly Sabins took part in the fighting, led by King Titus Tatius. The fight was interrupted by the intervention of women who ran into the middle of the fight and begged their husbands and fathers to stop the war. Tacius and Romulus decided to create one state. Common rule lasted only a few years, interrupted by the sudden death of Tatius.

One day in 716 BCE (after 37 years of rule), when Romulus was inspecting the army, there was a great storm, and a thick fog enveloped the place where the king was sitting. When the fog subsided the king was gone. The whole event took place during joint meetings of the people and the senate on Field of Mars. The mysterious disappearance of the king angered most of the Romans because they suspected that the monarch’s entourage had killed him and the body was hidden. To avoid rebellion, it was proclaimed that the virtues and merits lifted the king to heaven, where his father, god Mars, was staying. One of the senators then appeared and swore an affidavit that Romulus himself appeared to him in the morning, announcing the power of Rome as the future capital of the world. Livius gives his words:

[…] at break of dawn, to-day, the Father of this City suddenly descended from heaven and appeared to me. Whilst, thrilled with awe, I stood rapt before him in deepest reverence, praying that I might be pardoned for gazing upon him, “Go,” said he, “tell the Romans that it is the will of heaven that my Rome should be the head of all the world. Let them henceforth cultivate the arts of war, and let them know assuredly, and hand down the knowledge to posterity, that no human might can withstand the arms of Rome.” It is marvellous what credit was given to this man’s story, and how the grief of the people and the army was soothed by the belief which had been created in the immortality of Romulus.

The words of the citizen reassured the people who were now certain that their king had been raised to heaven and that the gods were favouring them. Romulus was said to have become a Quirinus. 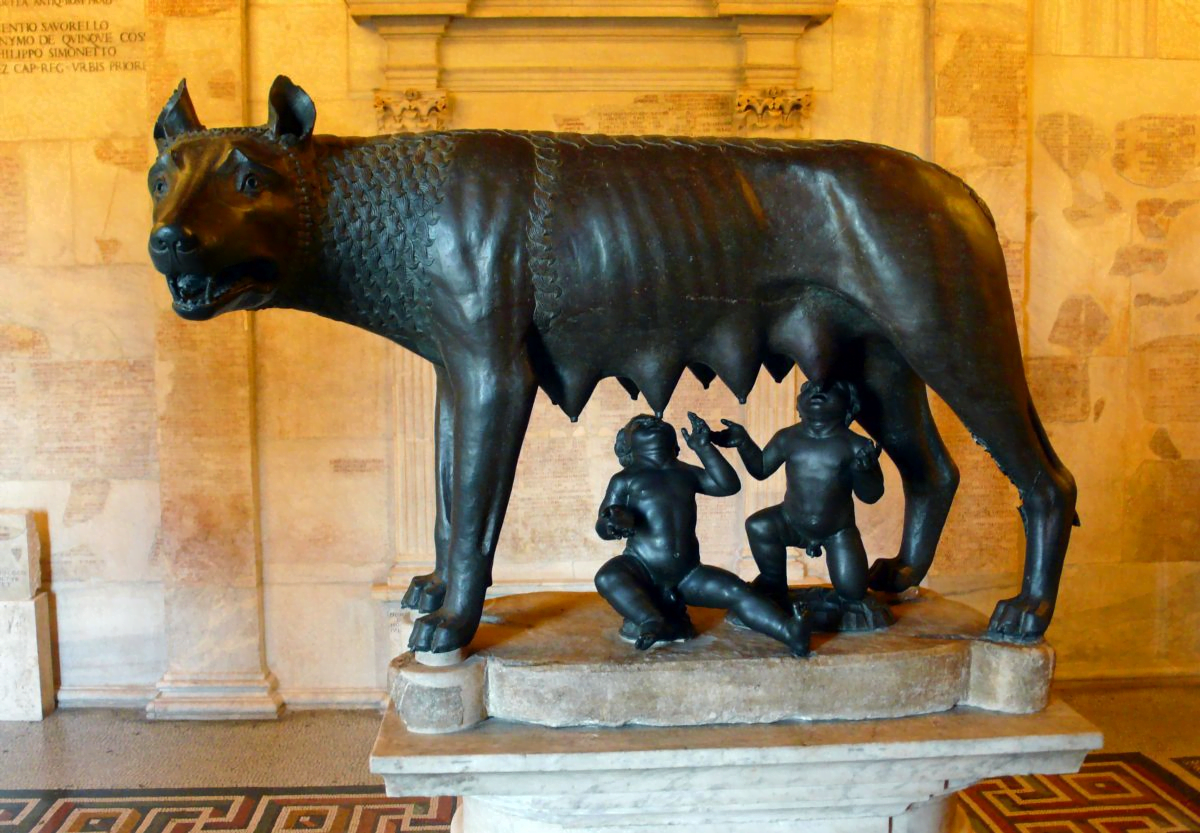 The famous sculpture of the nursing she-wolf Romulus and Remus does not come entirely from one period. Certainly, the twins are a later addition, made in the fifteenth century, specifically to depict the founding myth. Copies of this sculpture can be found all over the world, mainly because Benito Mussolini distributed them right and left – as evidence of the maintenance of Roman traditions.

Continuing the legend, Hersilia, wife of Romulus, cried a lot after her husband’s start. Juno sent Irida to her. She asked Hersilia to follow her into the grove that grows on the Quirinal Hill. When they were there, a star fell from the sky and turned the queen into a goddess. She ascended to the sky where she remained forever by the side of Quirinus, under the name Hory.

Be harmonious, enrich the soldiers, scorn everybody else~Septimius Severus