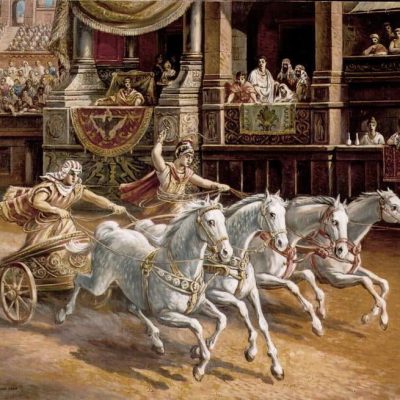 During Ludi Romani there were chariot racing.

Ludi Romani it was the most important Roman festival, also called Ludi Magni. It took place on September 5-19. Initially, during the festival, games, races and theatrical performances were organized to honor the god Jupiter, but later the religious significance of the festival was forgotten. On September 13 (originally there was only a feast then), a cow sacrifice was made in the temple of Jupiter, and the entire Senate and city officials participated in the feast. The statue of Jupiter, Junons and Minervas were dressed and placed on beds to feast with mortals. The procession then went to the Circus Maximus where the games were held.

The feast was to be established by Tarquinius the Old after the conquest of the city of Apiolae or as indicated by Dionysius of Halicarnassus and Cicero after the victory of the Romans over the Latins in the Battle of Lake Regillus in 496 BCE (so-called votum). The holiday began annually from 366 BCE.

Can anyone be proved innocent, if it be enough to have accused him?~Julian the Apostate