Nerva was born on November 8, 30 CE in Narni (an Etruscan city north of Rome) under the name of Marcus Cocceius Nerva.
He was Roman Emperor from 96 – 98 CE and founder of the Antonine Dynasty, which lasted for nearly a hundred years. This dynasty took its name from the ruling in the middle of the 2nd century CE Antoninus Pius. The reign of this dynasty is described as the “golden age of the empire,” during which Italy and almost the entire empire were free from armed conflict, except for a few frontier wars, and enjoyed extraordinary prosperity.

He came from a distinguished senatorial family, though not belonging to the Roman elite, in which from grandfather Nerva, members reached the consulate. His grandfather, father and himself became famous as experts in the subtleties of the law, and all of them were appreciated by successive emperors. During the reign of Nero he was his close friend. However, he did not participate in his adolescent antics. He not only gave him his talent as a poet (he composed poems for Nero) but also, as a lawyer, gave him considerable services in discovering the plot of Pisano. He received high decorations (triumphal decorations) as a reward.
From his youth, Nerva was characterized by diligence, meticulousness, clarity of views and the ability to win over people. He had friends in all spheres.

In 65 CE, while holding the office of praetor, he discovered and foiled the plot of Gaius Piso to murder Nero. He was consul with Vespasian in 71 CE and with Domitian in 90 CE.
After the murder of Domitian, the conspirators appointed him emperor on September 18, 96 CE, possibly because of his advanced age (61) and childlessness. There was no question of reviving the republic. Firstly, none of the living remembered the old system as it had ruled 150 years earlier, and secondly, the main military force in the capital – Praetorians, already attached to the person of the emperor, would not agree, and the Senate had to take them into account.

However, another reason is also given. Apparently, it was about the horoscope presented by a certain astrologer Nerva. He said that the certain present alignment of the stars foretells Nerve’s reign. Considering the age of Nerva, Domitian spared the unfortunate, which was to enable him to come to power.

After his accession to the throne, Nerva pursued a much softer policy than his predecessor. He has endured a crime for offending majesty. It was mainly through her that Domitian won such hatred of the Senate, which supposedly wanted to completely remove him from history, destroying all signs that prove his existence. However, no one succeeded in such a maneuver, and probably no one would succeed in the future. The former emperor’s generous savings in the treasury for buildings, games, etc. quickly melted, and Nerva had to start austerity. He increased taxes, did not hold games for a while, limited the amount of free grain, and even sold unnecessary imperial properties. Thanks to such actions, the treasury quickly regained its former glory, and Rome could afford to bear these inconveniences. 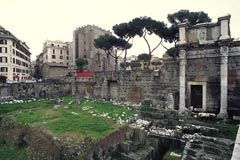 Forum of Nerva was originally supposed to be named after Emperor Domitian, construction initiator. However, when the latter was murdered, the new emperor, Nerva, having completed the construction, decided to give it his name.
Creative Commons Attribution license - On the same terms 3.0.

In addition, Nerva released prisoners accused of treason, forbidding such accusations in the future, restored confiscated estates, strengthened the importance of the senate, and banned denunciation. He helped poor Italian farmers.

Nerva tried to exercise his rule in accordance with the vision of an ideal ruler (optimus princeps), who not only fulfilled the duties related to the position entrusted to him, but was also able to meet the aspirations and expectations of citizens, so as to harmoniously combine principles and freedom. This ideological reflection developed especially in Seneca the Younger, who realized it when he was still Nero’s educator and advisor.

In 97 CE, a certain Sextus Julius Frontinus was appointed by Nerva as the curator of Rome’s waterworks. Almost a peer of Nerva, he held high positions until the consulate in 73 CE inclusive. He conducted historical research on the problems of water supply in the capital. Their fruit is the work “On aqueducts” (De aquis urbis Romae) dedicated to Nerva, although it was already published under Trajan. Frontinus wrote in his testament: “The expense of a monument is superfluous; my memory will endure if I have deserved it in my life”1.

Here is what Frontius wrote about Roman aqueducts:

Having detailed those facts which it was necessary to state with reference to the ajutages, I will now set down what discharge each aqueduct, according to the imperial records, was thought to have up to the time of my administration, and also how much it actually did deliver; then the true measure, which I reached by careful investigation, acting on the suggestion of that best and most industrious emperor, Nerva.​ Now there were, in the aggregate, 12,755 quinariae set down in the records,​ but 14,018 quinariae actually delivered; that is, 1,263 more quinariae were reported as delivered than were reckoned as received.​ Since I considered it the most important function of my office to determine the facts concerning the water-supply, my astonishment at this state of affairs stirred me profoundly and led me to investigate how it happened that more was being delivered than belonged to the property, so to speak. Accordingly, I first of all undertook measurements of the intakes of the conduits and discovered a total supply far greater — that is, by about 10,000 quinariae — than I found in the records, as I shall explain in connection with each aqueduct.

[…] This is the schedule of the amount of water as reckoned up to the time of the Emperor Nerva​ and this is the way in which it was distributed. But now, by the foresight of the most painstaking of sovereigns, whatever was unlawfully drawn by the water-men, or was wasted as the result of negligence, has been added to our supply: just as though new sources had been discovered. And in fact the supply has been almost doubled, and has been distributed with such careful allotment that wards which were previously supplied by only one aqueduct now receive the water of several. Take for example the Caelian and Aventine hills, to which Claudia alone used to run on the arches of Nero. The result was, that whenever any repairs caused interruptions, these densely inhabited hills suffered a drought. They are all now supplied by several aqueducts, above all, by Marcia, which has been rebuilt on a substantial structure and carried from Spes Vetus to the Aventine. In all parts of the City also, the basins, new and old alike, have for the most part been connected with the different aqueducts by two pipes each, so that if accident should put either of the two out of commission, the other may serve and the service may not be interrupted.

[…] The wages of the State gang are paid from the State treasury, an expense which is lightened by the receipt of rentals from water-rights, which are received from places or buildings situated near the conduits, reservoirs, public fountains, or water-basins. This income of nearly 250,000 sestertii​ formerly lost through loose management, was turned in recent times into the coffers of Domitian; but with a due sense of right the Deified Nerva restored it to the people. I took pains to bring it under fixed rules, in order that it might be clear what were the places which fell under this tax. The gang of Caesar gets its wages from the emperor’s privy purse, p451 from which are also drawn all expenses for lead and for conduits, reservoirs, and basins. 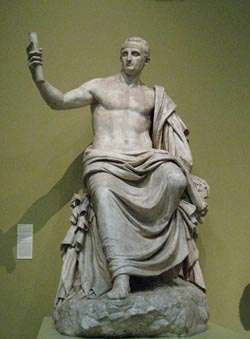 Pipes made of lead caused infertility among the Romans, which the ancients did not realize. The Romans, who so loved clean mountain water, brought death to themselves through pipes.

Nerva, being only a senate emperor, had no support from the army and praetorians. In 97 CE, Nerva met with a rebellion by the Praetorian Guard led by Prefect Cassperius Elianus, which forced him to hand over those responsible for Domitian’s death. Nerva knew his end was near, and he had to deal with the coming power struggle somehow. In October 97 CE, during one of the ceremonies on the Capitoline Hill (where did he go to thank Jupiter for the Roman legions’ victory in Pannonia, thanks to which he was nicknamed Germanicus), he adopted a man named Marcus Ulpius Trajan, legate of Upper Germania and commander of the Roman army on the Germanic front, and made him co-ruler. He joined the adoption immediately after the tribunicia potestas designation as consul for CE 98, both of which were to be held together so that Trajan would actually become a co-emperor.
In this way, Nerva managed to protect Rome from a possible civil war by entrusting the throne to one person. It was one of the greatest achievements of the short principate of Nerva.

He died on January 27, 98, and was buried in the Mausoleum of Augustus next to Octavian Augustus or Tiberius.
Nerva, judging his merits, made this statement without false modesty: “I have done nothing that would prevent my laying down the imperial office and returning to private life in safety!”2.

Let the man who does not wish to be idle fall in love!~Ovid